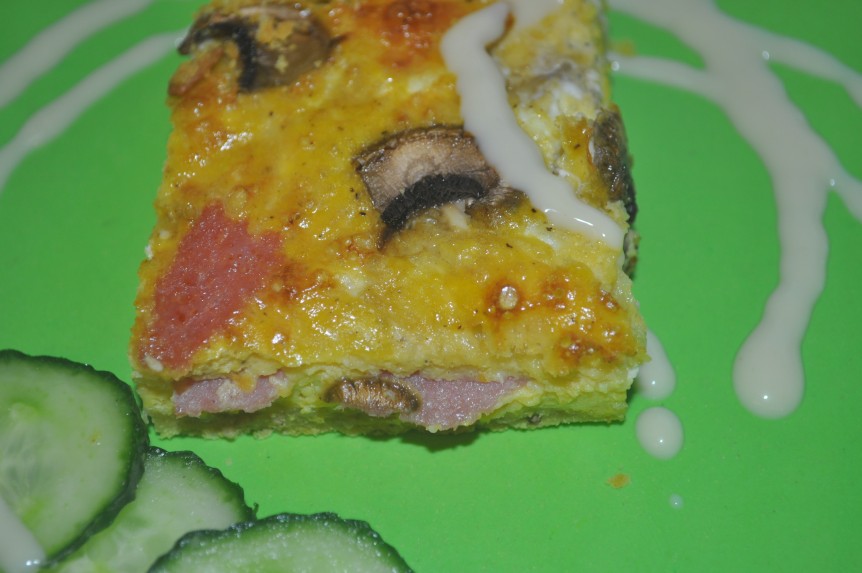 Pastry is one of the easiest things you can make. I’m talking short-crust here. I once made puff pastry and what an absolute arse that was. Unless you happen to have a ridiculous amount of time on your hands then some things are simply best bought in.

It’s cold, dark and wet (again) today so my thoughts turn to warming food and pastry – which in turn opens up the possibility of lots of fabulous winter meals, perfect for the grim weather outside. Pasties, pies ….and quiche which is what I’m going to be making today because it suits the ingredients I happen to have right now in my fridge. 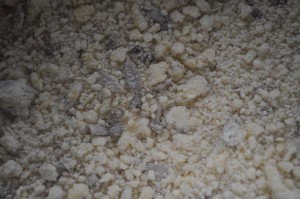 Let’s get cracking then

As I say, the weather is officially pants and I have a lot of eggs that need using up so this’ll be perfect.

To make the pasty I take half a packet of salted butter and cut it into small pieces over a bowl. To this I add about the same amount of flour – so roughly two cups worth of plain flour. I use spelt which is my healthy flour of choice. You can tell when you’re crumbling the mix through your fingers and working the butter into the flour how much you need. An egg yolk will help it bind but it’s not essential.

To jazz things up a tad I also add some sesame, sunflower and hemp seeds along with a bit of turmeric, thrown in for anti-inflammatory measure. Poppy or onions seeds also work really well here. 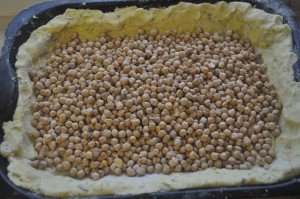 How to avoid the dreaded soggy-bottomed quiche

Once it is sufficiently crumbly I add water a bit at a time, stirring it in with a fork till the mixture starts to bind together into a ball. Then you can either stick it in the fridge for half an hour (so it’s less sticky and therefore easier to roll out) or if you’re in a hurry, just use a bit of extra flour on the surface and roll away.

Grease proof paper is useful to line your baking dish of choice but a coating of butter works just as well. Place the pastry into your dish, cover it with a thin layer of dried beans or peas of some kind to keep the pastry flat and cook it in an oven (180 degrees C) for about 15 mins till it has firmed sufficiently. No one wants a soggy-bottomed quiche and your dried beans (I used chick peas) can be removed and reused for this purpose over and over again.

Time to really get cracking 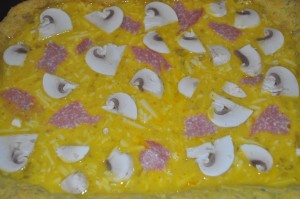 I mixed up 6 eggs (as it’s a large mother of a quiche), a few splashes of milk, a dash of salt and pepper, a big tablespoon (or two) of mustard, and lots of grated cheddar to taste. I used about half a medium sized block of cheddar, so 150g. You can throw in whatever you happen to have kicking about in the fridge or that takes your fancy. Caramelised red onions, pepper, tuna, bacon, olives….

I poured the mixture into its pastry casing before adding some roughly torn slices of German salami and thinly sliced mushroom for added flavour and winter warming. 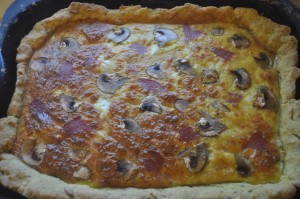 Now i know processed meats have had a bad rep recently but a bit of what you fancy every now and again isn’t going to harm you.

Anyway… then it’s into the oven for about 30 mins (180 degrees C) before it’s well and truly time to get scoffing!