In an extract from their new book; home schoolers Lehla and her husband, Anthony talk about their experiences when it comes to dealing with the sometimes disapproving reactions of others… 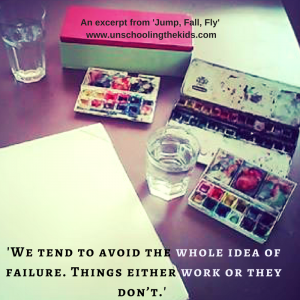 Sometimes people get curious and want to know if our way of life works according to their framework. Some of our relatives sneak little tests in to reassure themselves that somehow the children are not morons. It is quite amusing sometimes to see the low level but sneaky way it is done.

They test us parents too with one of the most often asked questions being about how we think our children will get into university. I am tempted to quip sometimes ‘Through a door.’ But really it shows the challenges of very different assumptions about the paths to the door of further education.

I do not get too bothered by this unless it is affecting the children. Then we might quietly step in and have a chat with the relative or person

involved. It almost always comes down to the fact that they are fearful in some way.

As we have stepped out of the norm there has been quite a lot of questioning. People, very occasionally try to test the kids but they aren’t very cooperative and don’t seem to feel the urge to answer the questions like ‘Do you know your eight times table?’ They don’t seem to get into discussions, they don’t seem to have a need to prove what they know and don’t know. I have learnt to let them fend for themselves around the constant quizzers! They are polite to people and if people are rude they generally choose not to be around them. I also am a bit the same way I think.