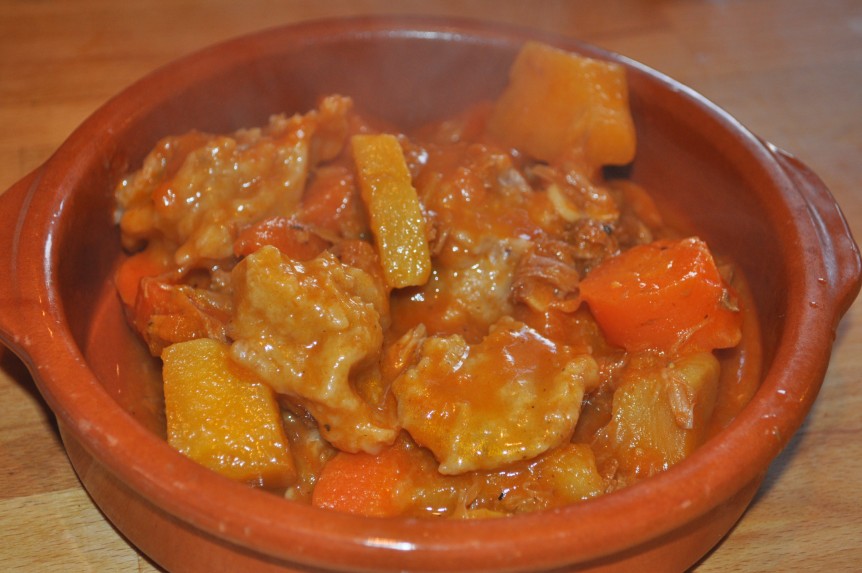 So it’s almost May but looking outside you wouldn’t know it. This week we’ve had snow, hail and a severe chill that has made the prospect of summer seem all that much further away. Yes it’s annoying but rather than getting down in the dumps about it all I suggest embracing the cold with a lovely hearty meal. We could call it the ‘look it’s still cold but warmer weather is on its way so that’s  probably just about alright’ stew and it’s a perfect excuse for using up the final remains of some of last year’s veg crop to boot.

There’s something very special about a stew, especially when you throw some home-made dumplings into the mix and this fine peasant dish is guaranteed to put a smile on your face and a warm glow in your tummy no matter what the weather happens to be doing at that moment outside. 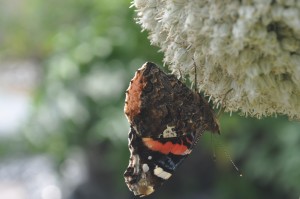 I like to leave some leeks to flower on the veg patch even if I’m not seed saving from them because their flowers are spectacular and it’s worth it just to see the butterflies they seem to attract alone.  That said I’ve left a few too many in the ground this year so I’m going to harvest a few for this stew.

Then there are the final swedes which have gone slightly spongy but which still have a lot to offer in a long slow cooked dish of this kind. 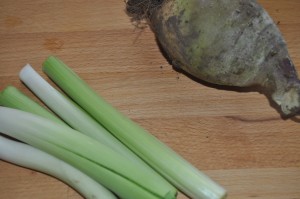 Perfect for leftovers a stew is very forgiving and any number of leftover, slightly knobbly and past their best vegetables can be thrown in and transformed into something lovely. I recommend root vegetables most, especially those with a sweet disposition such as swede, carrots and parsnips but equally, potatoes, leeks, cabbage also work really very well.

I’m using some leftover lamb on the bone for this dish so as it’s already cooked I’ve simply thrown the lamb and the roughly chopped vegetables into a large water filled saucepan to long slow cook on a low heat for a good few hours whilst I go off and do something else instead. I’ve also added a chopped onion, a few garlic cloves and some salt and pepper to taste.

Your kitchen will smell amazing and the lamb will be so deliciously tender it will practically fall off the bone into the dish. If you have a dog they’ll be climbing the walls at this point waiting for that lamb bone to come their way – be warned. 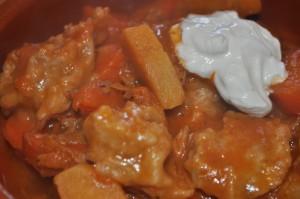 Now it’s also time to have some fun getting creative with the dish so it turns out just the way you’d like it.  I’ll be adding some Worcester sauce, Dijon mustard, probably more salt and pepper and a little tomato puree. It’s also not too late to add in herbs such as thyme which makes a nice addition to the flavour. If you like goulash then why not add some paprika, bay leaves and more tomatoes and sour cream always makes a nice addition either in or on top of the stew.

I also highly recommend dumplings which are so easy to make and which can easily be added near the end. Rather than making plain old dumpings why not experiment with different favours, even a spoonful of horseradish or some seeds, or mustard mixed in can liven things up no end.