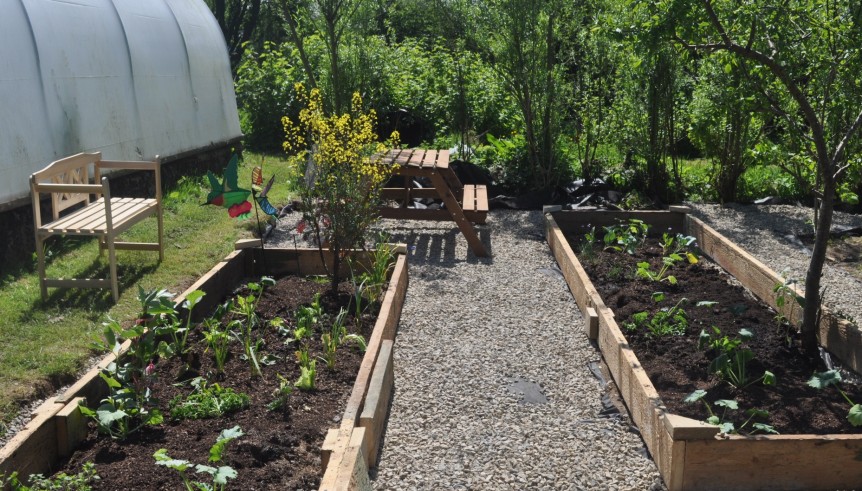 What’s not to love about the ability to turn much of your kitchen waste into fantastic black gold for your fruit and vegetables? Okay, I’ll admit; the idea of a big pile of slowly rotting household waste may not immediately grab you as being a) at all glamorous or indeed b) practical unless you have a lot of space. Yet actually it’s both. Nowadays the ability to compost comes in many rather ingenious (and attractive) materials, shapes and sizes. You don’t actually need to have a garden because an increasing number of bins are designed for indoor use. Even if you just have a window box or a few hanging baskets – an exciting world of composting opportunities await…

Alongside the satisfying warm feeling inside that you get from knowing you’re responsibly transforming your vegetable peelings – home-made compost is truly invaluable. Adding it to the ground or as part of your container plantings will help improve soil health which in turn will boost your food growing efforts. Plus, regular mulching with this nutrient-rich humus will feed your plants and supress pesky weeds. It also has the added benefit of helping to absorb and keep in moisture so with water-hungry container plants it really comes into its own.

But what about the smell I hear you ask – aren’t compost heaps, well, stinky?

No, thankfully not; they should smell actually rather nice. If you have room to house a traditional compost pile (which i personally much prefer), they can be easily made from pallets (for free). As with any traditional compost bin, it is true that on rare occasions a heap can ‘go bad’; in which case it’ll smell but as long as you keep roughly to the composting rules and don’t throw in anything silly like a fish or pork chop – this is most unlikely to happen.

That said there are now bins where you can do just that; where you can chuck in pretty much any (and all) waste from your kitchen and it’ll get broken down quickly and transformed – but I’ll come to these in a minute.

How to make compost 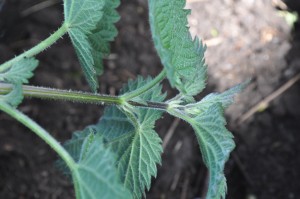 I have to confess I’ve been a bit slap dash with my compost making over the years but that doesn’t matter a jot. As long as you throw in the right sort of ingredients ( an equal (ish) mix of green (veg peelings, plant clippings, grass etc) and brown (cardboard, newspaper, straw…) then the compost-accelerating worms, microbes and insects will do the rest of the job for you.

To speed up the process turning the pile helps and i’d also strongly recommend adding in a few layers of your last batch of home made compost in-between and on top to really help things along. Also i’ve 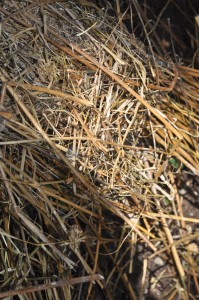 found that where possible having your pile touching the ground makes it easier to encourage a wider array of little helpers to the compost-making party.

Other things worth adding include spent chicken bedding, borage, comfrey and nettles (without roots), grass clippings (without weed seeds) and seaweed for a super charged nutrient boost.

Overall, an open compost bin is best but for city gardens a plastic bin works just fine – it’ll keep moisture and warmth in and look a lot neater than an open pile.

There are bins for every space and budget which will save you potentially rather a lot of money in the long term. Here are just some of the different options available:

From your bog standard plastic bins (which you can often pick up very cheaply via your local council) to attractive (but more expensive) hive-shaped wooden bins, the options are extensive. Tumbler bins are a good choice if you want to process your compost quickly as they enable you to turn the pile by way of a handle, thereby speeding up the process rather dramatically. As the bin is fully sealed and usually off the ground, they are rodent proof and can make a safe (and attractive) addition to a patio or balcony. Not cheap but generally solid and built to last – they cost in the region of £100. 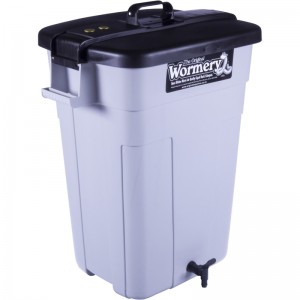 As long as you don’t have an issue with worms (and if you do – shame on you) then a small worm-based system is ideal for someone with little or no garden.  Also known as vermicomposting, it will process the same kitchen waste as a traditional compost bin although you need to avoid adding citrus as the worms really don’t like anything too acidic. This method will in turn provide you with a fantastic nutrient- rich compost as well as a liquid plant feed, both of which are ideal for boosting the results from your container plantings. The liquid fertiliser needs to be diluted 10 to 1 so even a little goes an incredibly long way. It’s especially useful for hungry plants like tomatoes and peppers.

Whilst you could technically have any of the wormery bins in your house – Original Organics, the company that first brought the wormery to market, recommends the stainless steel wormery as being hygienically best for indoor use. It retails at £64.95. They also sell a junior wormery which is ideal for single person use or as a project for children and which costs £39.95 and the midi which is a bit bigger at £49.95.

If you have room for a wheelie bin, then a good way to get super-fast results (30 to 90 days) easily is via one of the hotter composting systems. Although more expensive, these units will apparently safely kill off weed seeds and pathogens and you can feed them a much wider variety of waste than normal, including cooked food, dairy and meat leftovers. The Green Johanna is recommended for a shady spot and costs from £108.90 via www.greatgreensystems.com while the Hot Bin starts at £165.00 from www.hotbincomposting.com and has had rave reviews. 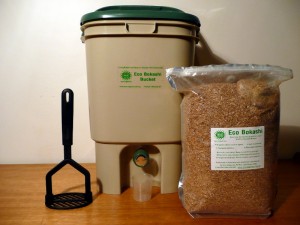 This rather fascinating process ferments your kitchen waste by way of an intriguing mix of wheatbran, molasses and micro-organisms. Like the hot bin system you can feed it any food waste including fish and meat leftovers, safe in the knowledge that all pathogen nasties will be killed off. It’s ideal for indoor use because the buckets are small and don’t smell. You simply pile each layer of waste with some of the ‘magic’ bokashi bran and when the bin is full, leave it for a couple of weeks to further ferment before using it as plant food. Be warned though that the end result doesn’t look particularly compost like, more pickled, but once mixed into soil it breaks down rapidly.  It’s best to have two bins on the go so you can alternate usage.

It’s widely regarded as one of the easiest composting systems out there.  Wiggly Wigglers sell urban bokashi systems starting at £29.95 for a single bucket.

Some of the more unusual methods available

First off there’s the rollable CompoSphere, which sounds rather fun. Like a tumbler system, the idea is you can turn the contents to speed up the composting process. It’s just in this case you roll it about the garden instead. It sounds like a good idea for children and big kids everywhere. Original Organics sell them for £99.95.

If you’re not inclined to feel squeamish then get this; the Biopod Grub Composter which retails for $185 via www.compostmania.com  processes kitchen scraps by way of a grub-based system, or to be more precise, by a lot of juvenile Black Soldier Flies. Apparently this is an excellent choice for fish, bullfrog, chicken and songbird feeders. I’ll spare you any more details about crawl off ramps and the like but I have to admit – that one’s a bit much for me.